People who are obsessed by high quality sound experience, will be definitely love the Blu-ray audio. Because the large storage of Blu-ray disc gives the lossless audio quality.

So, a few people asking on Google: how to extract the audio from Blu-ray movie? If you are one of them, you come to the right place. It's not too hard to rip Blu-ray to a audio file such as FLAC, MP3, etc. What you need is a Blu-ray Audio Ripper, which can help you get the sound from Blu-ray disc without the limitaions of copyright protection.

Normally, the drive that build-in with computer is a DVD drive which cannot support Blu-ray disc. So, you need to buy a external Blu-ray drive to complete the Blu-ray to audio conversion.

To rip audio from the Blu-ray disc, a Blu-ray audio rippping software is must. It's again the value that decides the function. Free programs always have their limitations. Here, VideoSolo BD-DVD Ripper is the program we recommend.


It's a really easy tool to help people get the audio from the Blu-ray without any skills. The whole conversion can finish with only 3 steps: Add File > Select Output Format > Start Converting. All the tools are clearly arranged on the intuitive interface. VideoSolo Blu-ray Ripper is mainly used to rip physical Blu-ray and DVD disc to digital video and audio format. It provides over 300 preset output formats and devices including the mainstream audio format such as MP3, FLAC, M4A, OGG, etc. Use the free trial version to have a try!

Step By Step Tutorial: Extract the Sound from Blu-ray Disc


Insert your Blu-ray disc to the Blu-ray drive and make sure the computer can read the disc successfully. Go to the main interface of the program and click on "Load Blu-ray" button to import the Blu-ray disc content to it. You may wait for few minutes as this program need to unlock the copyright protection of Blu-ray disc. In addition, this work must be proceed with good internet connection. So, please make sure you have a well network before you start the conversion. 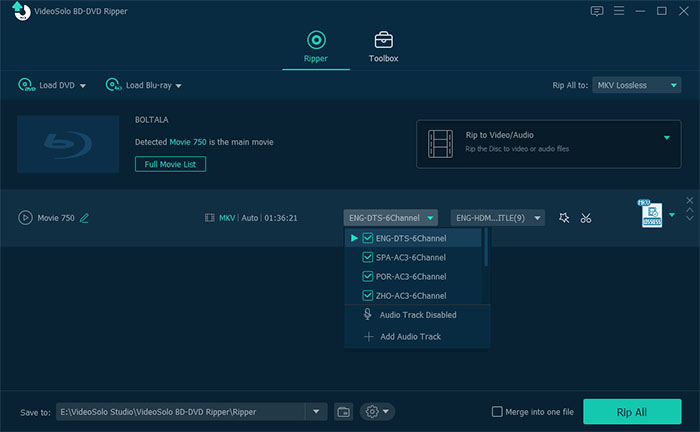 Now we can open the output format list by clicking the "Rip All to" icon. You can go to "Audio" to find your desired audio format. Here, it has already listed all the major audio format including MP3, M4A, FLAC, AAC. 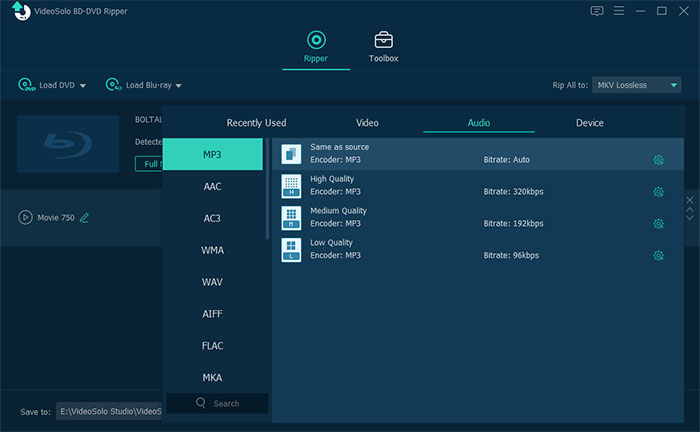 MP3: MP3 is the most popular audio compression format and is widely accepted by people. Most hardware products and software support this audio format. If you don't know the compatible format with your devices, just pick the MP3.

FLAC: The optimal audio format that offers true CD quality is FLAC. It compresses the audio with half the original size but still remaining lossless quality. So, ripping Blu-ray audio to FLAC can be a good choice for who want to high audio quality.

M4A: This format is mainly applied by Apple product. The M4A file is compressed but the quality is still lossless. And normally, the M4A audio performs in better sound quality than MP3 coded at the same bitrate. Apple users can take it into consideration.


Now, if you have selected the output format, you can directly click on the "Rip All" button to get the Blu-ray sound into MP3, FLAC, M4A, AAC, etc.

Knowledege base: The file size and quality is directly related to the bitrate. When the audio bitrate increases, the sound quality will increase as well and so does the file size. But as the parameters of the source file can't be increased, the audio quality will have no big change even you choose the higher bitrate before the conversion.

When the conversion is over, you can extract the audio from Blu-ray disc successfully. I beileve you have seen that VideoSolo Blu-ray Ripper also supports many video formats besides audio format. So if you have need to rip video from Blu-ray movie, this program is also a good helper.

Words in the End:

Follow the above tutorial, you can easily extract audio files from Blu-ray with VideoSolo BD-DVD Ripper. Once you have liberated your Blu-ray movie to audio files, you will want to make it available for playback on your portable cool gadget anytime, anywhere - not just on the machine at home.