Which Video Format is Better? MKV or MP4

MKV and MP4 are two kinds of the most common video formats in the downloaded video files. When it comes to the difference between MKV and MP4, the following question are always being concerned about:


1. MP4 can be played by almost all media players. However, the compatible of MKV is worse than MP4, especially on mobile devices, why?

2. The MKV format file is generally larger than the MP4 format. Is that mean MKV is better than MP4 in video quality?

3. Why do people often choose MKV format when they need to rip Blu-ray discs?


As a digital video lover, the knowledge about MKV and MP4 is the important part that you cannot miss. Here in the text, you could know more about the different aspects of MKV and MP4, which may help you make your own choice between them. The above-mentioned questions are also answered in this article. If there are any other queries about MP4 and MKV, please leave a message in the comment area.

Free Way to Convert MKV to MP4 with Good Quality

Quick Guide: How to Convert MP4 to MKV Video Format

What is MKV? MKV is developed by Matroska.org. From the pronunciation of Russian, it sounds like матрёшка (Russian dolls). That is nice and funny because MKV is a container format. It encapsulates multiple media formats together like the Russian dolls. The MKV video format has the powerful ability to store an interminable amount of video, audio, image, subtitle media format into one single file, such as FLAC audio format and ASS subtitle format.


What is MP4? As an abbreviation for MPEG-4 Part 14, MP4 is probably very familiar to all of us. Same as MKV video format, MP4 is also a container format. It is featured by the mixing function of merging various digital streams into one file easily. However, MKV and MP4 have different capabilities of encapsulation. For example, MP4 cannot encapsulate closed caption format like ASS as MKV does.


From this part, the most important message we know is that MP4 and MKV are both container format, but not media format. Although two files both can be suffixed with .mkv, the audio and video media formats encapsulated inside may not be the same. This explains why some players cannot play videos in the same container format. In the second part, I will introduce the difference between MKV and MP4 in more detail.

MKV vs MP4: Differences between MKV and MP4

# Brief Table of MKV vs MP4


That's also why the videos optimized for mobile devices basically choose MP4 for encapsulation. You can play MP4 video on different kinds of portable players like Apple iPad/iPhone/Android phone without limitation. On mobile devices, if you have downloaded some special third-party media players, you may also be able to play MKV.

The main combination for MP4 is video H.264 (x264)/Xvid/MPEG4 + Audio AAC/MP3. MKV supports FLAC lossless audios while MP4 not. MP4 could support another lossless audio ALAC, despite the fact that ALAC has a less efficient effect than FLAC. MKV supports selectable subtitles of ASS/SSA and selectable audio tracks while MP4 not. When ripping an optical disc, people always choose to rip DVD/Blu-ray to MKV, because it may keep the tracks to be selectable after ripping, this is what MP4 cannot do.

While MKV usually has a larger file size than MP4 videos owing to the support for the additional features, multiple audio tracks, and subtitle tracks, this does not mean the quality of MP4 file is not as good as MKV. Because MKV and MP4 are both container format and they can encapsulate the same video and audio. For example, they can both be encoded with x264 (one of H.264) + AAC, if other settings are the same, then the video and audio quality is exactly the same.

Quality has many influencing factors including resolution, frame rate, bitrate, sample rate, etc. It has no absolute correlation with a single factor.

Since that both MKV and MP4 are very popular and have a wide variety of uses in your daily digital life, sometimes you just want to convert videos to MKV or MP4, or convert between MKV and MP4 video, then you may need one third-party software to finish the converting task. VideoSolo Video Converter Ultimate comes up with the robust functions of converting videos to MKV and MP4 with the best output quality. In this product, you can adjust the video codec, audio codec, resolution, frame rate, bitrate to meet your own needs. 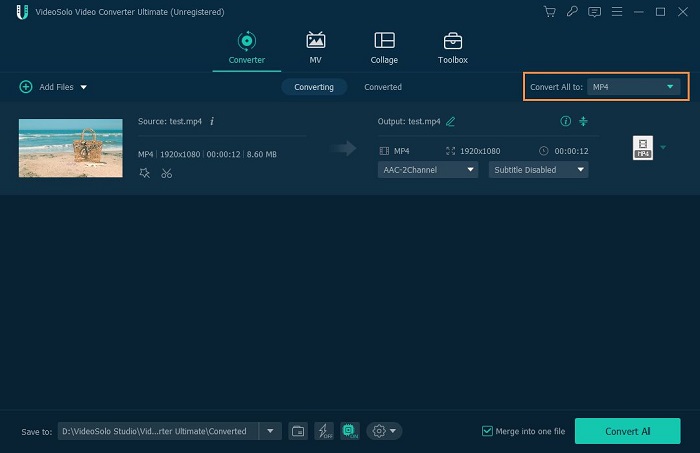 Apart from that, the wonderful program could help you convert videos to the mobile devices or media players directly while doing some necessary editing jobs for you. There are 200+ formats other than MKV and MP4 for you to choose from. Therefore, you could enjoy the converted videos with ease!