Netflix app is available on iPhone, iPad, Android mobile devices, Windows, and Mac. Although Netflix allows users to download movies and TV shows, there are still many people search for ways of recording Netflix on PC. And you will find that the downloaded videos are .nfv format which cannot be played normally in other players. Below are some difficulties people met which are the reasons they want to record Netflix to save it forever.

So, is it possible to record Netflix and convert .nfv video at the same time? The answer is yes. The article will introduce 5 simple ways for both PC and phone to screen record Netflix. Check it out.

VideoSolo Screen Recorder is a professional desktop software that can solve all the problems mentioned above and can easily record from Netflix and save the videos back to your computer in compatible formats such as MP4, MOV, WMV, etc. If your computer screen has 4K resolution and plays Netflix movie in 4K, you are able to capture a 4K video too. It supports recording both video and audio tracks, by doing which you can safely avoid capturing any annoying distractions.

Here are simple steps for you to use VideoSolo Screen Recorder as a way to capture videos from Netflix for watching at anytime, anywhere and any device.

Once you have installed it on your PC, fire it up and you will see a window below. Choose "Video Recorder". Then, prepare to start your Netflix movie. Make sure there is good Internet speed to play Netflix movie online smoothly and you're better to play the video in original size so that the best possible quality can be achieved.

VideoSolo Screen Recorder enables you to select any section of the screen. For recording Netflix, we generally choose "Full region". You are able to capture a 4K video as long as your computer screen has 4K resolution and plays Netflix movie in 4K. Even if Netflix only supports downloading video up to 1080P resolution.


To make sure your recorded Netflix movies are noise-free, turn off the "Microphone" sound but turn on the "System Sound". It's noted that Mac version needs anaudio driver when recording audio.

Click on the gear icon on the interface to preset your preferences. In the pop-up window, there are various settings. You can enable or disable some of the settings as you prefer.


If you are going to capture the entire Netflix screen and do not want any distractions on the recording video, try to tick "Hide float bar when recording" and "Auto hide the system taskbar when recording" as you desire. Meanwhile, you should also keep in mind your hotkeys to stop capturing and show the floating bar since there is no button for you to stop during recording Netflix.

Step 4. Clip and Save the Recorded Netflix Movie

Now click on "REC" to record, then begin to play your Netflix movie. After recording, there's a window for you to clip the Netflix movie. You can cut off the excess of the front and back, then save your recorded Netflix movies and then you can enjoy them forever without restrictions from Netflix.

How to Record Netflix Streaming Movie with OBS Studio

OBS Studio is a professional video recorder and has powerful editing functionality but require no charge. Its professional ability in screen recording can save you more time and energy when it comes to video recording and live streaming. Using OBS Studio, you can capture not only the entire Netflix videos or a window but also from webcam and microphone. When it comes to streaming, you can select which applications and audio sources to share. 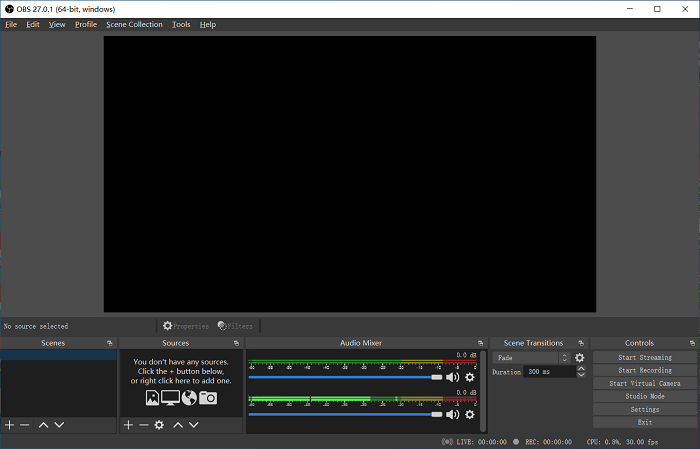 Download OBS Studio launch it. Click Sources in the main interface and choose the blank within the box, select “Display Capture”.

Open your video in Netflix, then turn to OBS Studio interface to select the mode “Capture Specific Window” and choose the video as your targeted capture window.

Click File>Settings, you can find Video and Output in the setting menu. You can make your preferences according to your computer configuration. Hotkey’s setting is also available for you to make full preparation for video recording.

When all the preparation is done, you can press “Star Recording” button to capture you screen.

AceThinker is a free online screen recorder that can record audio and the video to create the perfect screen recording. You can include or exclude the system sounds, configure the audio input options to use the audio from the system or via an external microphone. This online screen video recorder allows you to record the entire screen or choose to record a specific area of the desktop. You can save the recorded video to all popular video formats - including AVI, MOV, WMV, FLV, MP4 and many more to ensure that your recordings can be played and shared anywhere you like.

Open AceThinker in your browser, to start recording, you need to download AceThinker Launcher first.

You can click on the Gear icon to configure some general and recording settings like bitrate, audio quality, output format, frame rate, etc. based on your preferences; Hotkey’s setting is also available for you to better control the recording. 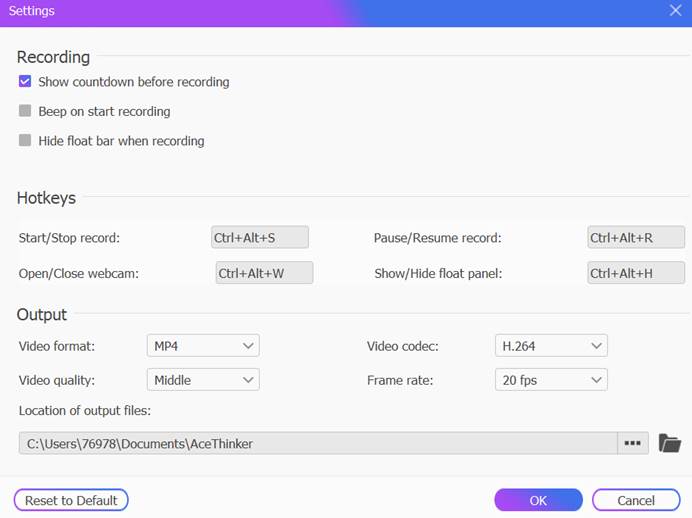 When set up all your settings, you can click the “REC” button to start your Netflix video and record it.

Few people knew that iPhone also has a built-in recorder that allow you to record everything on your iPhone. But it is only available on iOS11 and later version. If you have Netflix app on your iPhone, then you don’t need to download any other recording software to record your Netflix videos.

Go to Settings app on your iPhone and find “Control Center”. Click “Customize Controls” and find “Screen Recording” from the list option. Then press “+” to add it to your iPhone control center.

Launch your Netflix in iPhone and press “Screen Recording” button to begin your recording. You can turn the microphone option on.

Step3. Finish and Save Recording

When your video nis over, you can press the “Screen Recording” button again to stop recording. You can check your Netflix videos in Photos on your iPhone.

How to Screen Record Netflix with Sound on Android

Step 1. Download, install, and launch the AZ Screen Recorder on your Android phone.


Step 2. Enable the permission feature on your AZ Screen Recorder. The App may ask for permission to the audio, microphone, video, and file manager of your phone.


Step 3. You will see a pop-up screen of the AZ Screen Recorder App on your Android device, and the screen will give you access to record your Netflix Movies.


Step 4. You are able to choose your preferred call recording option. Then, you can now get started with recording your Netflix video without any glitches or lag.

As we know, Netflix has a built-in download feature. Recording while playing is convenient but the internet connection speed will need to be fast enough to play Netflix movie smoothly. Since online streaming is extremely vulnerable to a slow or intermittent connection, download the movie before recording is a good choice to make sure you capture the Netflix movie without any pause. Otherwise, it is necessary to know how to download a Netflix video before record.

On the computer, Netflix has only rolled out a download feature on Netflix App for Windows 8 and 10.

For most popular films or any other Netflix content, such as "Stranger Things" or "The Crown", Netflix members of the latest version can download them on "Menu" > "Available for Download" interface. To cache your loved Netflix streaming videos, just tap on or click the down arrow button on each movie or each episode of TV series. 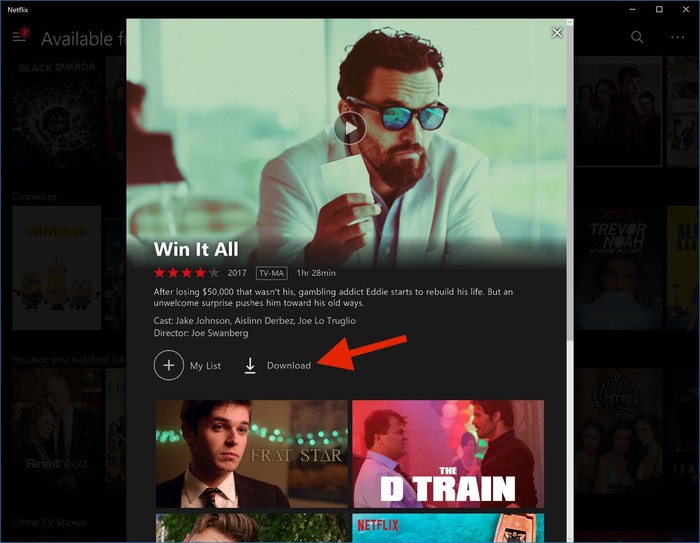 Step 3. After download, use VideoSolo Screen Recorder to record it without worrying about the slow internet connection.

Although each software has its features, there are disadvantage of them. For OBS, it’s an open-source recording software that is not stable enough and will stop working sometimes. For online recorder, they don’t offer much advanced video editing tool and video formats. For tools in iPhone and Android, you can’t choose video output format and set recording area as well as hotkeys setting.


No matter you are a PC user or iPhone user, VideoSolo Screen Recorder can be your prior options. It works with Windows and Mac system and can record everything on your screen perfectly in HD quality without lagging. Moreover, it can project your phone to the computer for recording via WIFI, which means you can also record your screen on iPhone.

With VideoSolo Screen Recorder, no need to worry about all the limitation of Netflix. You are now able to view or transfer the downloaded Netflix movie on any device such as your iPad, your mobile phone forever. But just remember, the recorded movie cannot be shared with other people because Netflix movie is under strong copyright protection.